Schönbrunn Palace, Zoo Enjoy the imperial history of Vienna as well as the amazing view in the Palace of Schönbrunn.

Enjoy the imperial history of Vienna as well as the amazing view in the Palace of Schönbrunn.

Back to the roots of the Habsburger, dive into the imperial scenery and visit the oldest zoo in the world in Schönbrunn. In 1996 Schönbrunn Palace and park were put on the list of UNESCO World Cultural Heritage Sites. The cultural and picturesque Schönbrunn Palace is one of Vienna’s most popular historical attractions and is waiting for you to be discovered. Make sure you have enough time to stroll through the entire estate. There is so much to discover in Schönbrunn that we suggest you should plan minimum a whole day. The history of the palace dates to the 17th century when it first was a hunting lodge and later turned into a stately summer residence for the imperial family. Under the reign of Maria Theresia in the 18th century, Schönbrunn Palace in its present form was built and remodeled and became the magnificent focus of court life. In these times the Gloriette, the Neptun Fountain, the Roman Ruin and the Obelisk Fountain were built as well. Don’t miss out on a tour of the residence. There are three different tours with an audio guide. When you are a bit tired after visiting almost 40 rooms, bear in mind that you have just seen less than 3% of the residences 1.441 rooms! 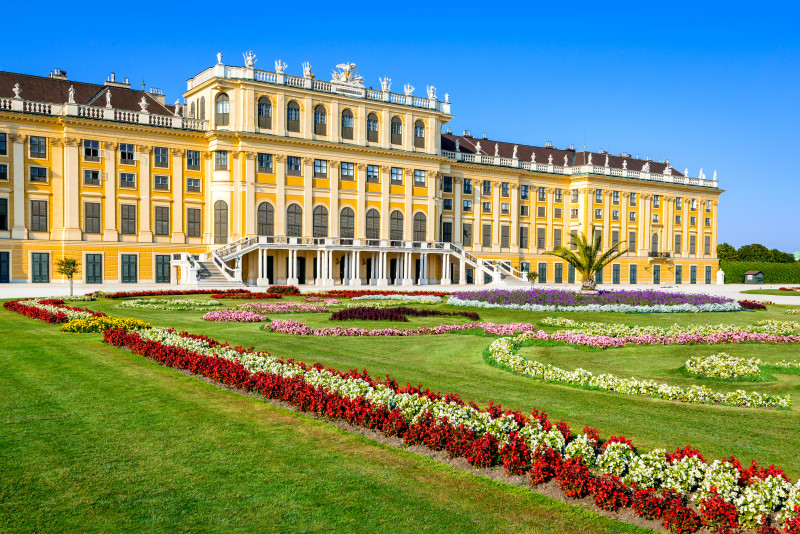 Besides the impressive palace there are several other highlights to see. Even though to walk up to the Gloriette, which was built in 1775, seems a little hard, it’s worth every step you took. The stunning view over the city will compensate you. Moreover, you can treat yourself with delicious Viennese specialties such as coffee and an apple strudel in the coffee house in the middle of the Gloriette. Our insider tip: take the bus number 8A to the station „Stranitzkygasse“ and walk on the street called “Hohenbergstraße” directly to the highest point of the Gloriette. Taking the bus you don’t have to walk up all these meters and you can immediately enjoy the amazing view. At the foot of Gloriette you can find the Neptun fountain which was completed in 1780. The fountain is more than 100 meters long and its rocky landscape peopled with the sea-god Neptune and his entourage is a popular spot to take pictures – not only for tourists. Moreover, you can find the Roman Ruin in the park of the palace which was built in 1778. The ensemble is completely integrated into the surrounding landscape as a picturesque garden feature. The Obelisk fountain which was erected in 1777 with a height of 31 meters is situated on the east side of the park. It is also a very popular place to take pictures. The maze is very popular for especially young people. It is right next to the Neptun fountain. From the middle of March until the beginning of November you can try to find your way to the middle for a valuable consideration. The maze was reconstructed in 1999 on the historical model with yew hedges. Before entering the zoo, we recommend visiting the Palm House and Desert House which is located on the west side of the park. On a ground area of 2500m² the Palm House shelters plants from all over the world in three climate zones. After paying the entrance fee you can observe palm trees, orchids, camellia, and the probably biggest lily in the world. Right next to it you will find the Desert house, the former Sundial House which was commissioned by emperor Franz Joseph I. Originally it was built to hibernate exotic plants. In 2000 – 2003 it was adapted to present a selection of desert plants and animals. The famous Zoo, founded as an imperial menagerie in 1752, is the oldest continuously operating zoo in the world. At a size of 17 hectares the zoo hosts more than 700 animal species. Our recommendation: visit the zoo during the week since on weekends it is very crowded

By the way: did you know that the fountain called “Schöner Brunnen” from the 16th century, which is a bit hidden was the eponym for the palace of Schönbrunn? The fountain is located right next to the Roman Ruins